The International Business Gateway (IBG), which has been talked about for more than a decade, would be built on vacant land between the airport’s Hilton Hotel and the main A8 road.

The development would include more than 122,000sqm of office space, 396 residential units, 1,150 hotel rooms and almost 5,500sqm of retail and leisure space. The plans are due to be considered by the city council’s development management sub-committee tomorrow and officials have recommended councillors back the scheme.

West Edinburgh was identified as a “national development asset” in 2008 and an implementation plan for “Edinburgh International: Scotland’s Global Hub” was launched in 2011. The proposed development is being driven forward by a consortium consisting of Murray Estates, Frogmore Property, New Ingliston Limited and Salmon Harvester Properties. They said the masterplan for the site had evolved over many years of collaborative working with the city council.

The IBG is intended as a shift away from the standard business park model to create a mixed-use development that will see activity throughout the day, with priority for pedestrians and cyclists over vehicles, plenty of green space and public areas. 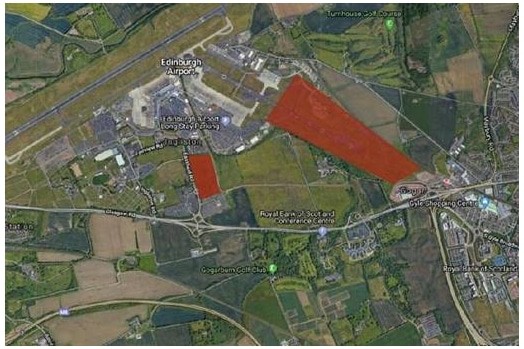 “This development will be great news for Edinburgh and for Scotland as a whole. The thousands of jobs we will create here will be a huge benefit both to the city and to the many people who will commute from other parts of the country.”

For many people, this area is their entry point into Scotland and as such it needs a world-leading centre for business, commerce and retail.

“With co-operation from others we can get this ambitious development under way and deliver all the benefits that it will bring to the city, including a tremendous boost to infrastructure.”

Edinburgh Airport said it supported the concept of an international business gateway, but had objected to the proposed development because Eastfield Road – the only road into the airport – was already over capacity.

The development consortium said it was pledging £7.1 million to dual Eastfield Road from the Dumbbells roundabout and had written to the airport, inviting them to contribute £1.6m to complete the upgrade. But the airport said it was the first they knew of that proposal and could not comment until they had considered the letter.

The area of the proposed development includes the Ingliston park and ride. The masterplan allows for possible redevelopment of that site, but it is not part of the existing application.

The developers said a significant number of jobs would be created during the infrastructure and construction programme and the first parts of the project would be completed within the next two or three years. The full development would be phased over 15 to 20 years.

“The jobs, growth and connectivity which the International Business Gateway will bring are good news for business and communities in Edinburgh and across Scotland.”

As seen in the Edinburgh News