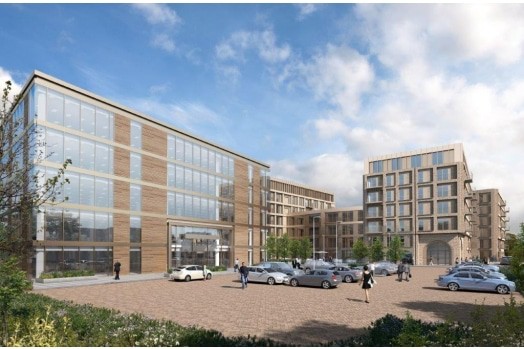 Salmon Harvester Properties has won a planning appeal against the Royal Borough of Windsor and Maidenhead to build a £200m mixed-use scheme comprising 217-one, two and three bedroom build-to-rent apartments and 106,000 sq ft of offices on Alma Road in central Windsor.

JLL has now been appointed to advise on delivery options for both the residential and commercial elements which could include a part or whole sale, bringing in a funding partner and developing out the scheme as consented.

The scheme also includes a new five-storey office building comprising 106,000 sq ft of workspace. Floorplates can be sub-divided.
Salmon Harvester chose to take its case to appeal after the Royal Borough of Windsor and Maidenhead failed to make a decision on the Alma Road site.


“substantial benefits, including improving housing delivery to make up the acknowledged shortfall in the council’s housing land supply, providing flexibly designed office floorspace that could support about 700 new jobs and making effective use of previously developed land”.


The Inspector agreed that the

“limited harm to the character and appearance of the area that he identified was clearly outweighed by these benefits”.

He also found there would be “no unacceptable effect on neighbouring living conditions, no adverse effect on nearby heritage assets and the parking and access arrangements for the scheme were acceptable”.

Doug Stewart, CEO of Salmon Harvester said: “I’m delighted we can now finally deliver a high quality scheme, creating around 700 office jobs and much needed homes for 217 households. The decision by the Planning Inspectorate will allow the redevelopment of this important site in Windsor to create a new high-quality and vibrant mixed-use scheme and highlights the importance planning authorities should place on the delivery of much needed homes and opportunities to create new jobs that support economic growth.”

JLL is acting for Salmon and is now advising on delivery options for both the residential and commercial elements of this mixed use scheme.